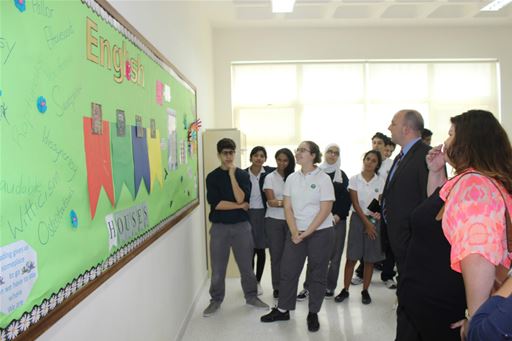 For weeks the secondary school students had been working tirelessly to create the beautiful, colourful boards displays we all enjoy each day. Each class had a team of students who pooled their creativity and focus, and when the presentation day arrived the teams put on a great show for the judges. The judges learned facts previously unknown to them and were delighted with the performances that many classes staged. There were jokes, pyramids, cartoons, fun facts, and amazing artwork to be seen around the secondary classrooms. After much deliberation about the victorious boards, a presentation ceremony was held.

Students from grades seven to eleven attended and each team member was awarded with a certificate of participation. Finally, the winners were announced and there was a photoshoot with all those involved. The ceremony wrapped up with a tasty feast of cake and doughnuts. The classroom boards now proudly display their winning certificates, and the boards themselves are a reminder of the wonderful creations that are possible with teamwork, creativity and dedication.