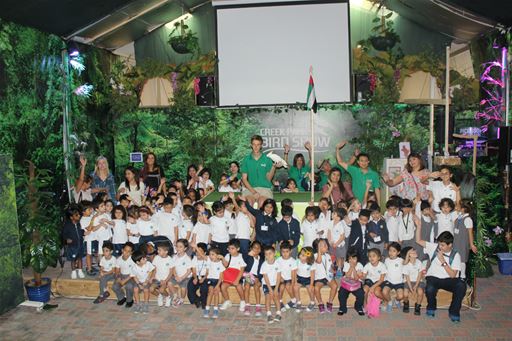 Saturday 21st November was a day to remember for our wonderful KG1 students. It was the day they had been anticipating - the school trip. It was 8.30am when the students arrived to school, so full of life and excitement about the day ahead. The parents happily bid farewell to their children, knowing that they were in safe hands. By 9am it was time to load up the buses and set out on our journey to Dubai Dolphinarium in Dubai Creek Park. The children were so co-operative and joyful on the bus journey, singing songs such as ‘The Wheels On The Bus” and “Twinkle Twinkle”.

It wasn’t long before we arrived at Dubai Creek Park, much to the children’s delight. We entered Dubai Creek Park and headed towards the Dolphinarium where the children would first be treated to the United Arab Emirate’s only exotic bird show. The show featured a vast array of birds and parrots such as blue and gold macaws and eclectus parrots. The bird show was an action packed experience. The children had the opportunity to get up close and personal with the birds as they swooped down low over their heads. The children’s screams of delight filled the room. During the show, the children learned about the high intelligence of these birds when they heard the African Grey speaking English, Chinese and Arabic. They watched as the cockatoo painted a picture and a macaw raised the UAE flag and played basketball. The children sat and looked on in awe as the spectacle unfolded before them. When the bird show came to an end, we took some pictures with the bird trainers and thanked them for putting on a wonderful show.

Next, it was on to see the dolphins and seals. Dubai Dolphinarium is the first fully air-conditioned, indoor dolphinarium in the Middle East, providing habitat to dolphins and seals. The children were treated to excellent seating that ensured they all had a great view of the large pool and stage where the dolphins and seals would perform. Dubai Dolphinarium is home to five black sea bottlenose dolphins; Senya, Ksyusha, Fekla, Tetka and Jerry and four Northern fur seals; Ghosha, Max, Fila and Lusha. We got up close and personal with these graceful dolphins and playful seals at the action packed show. The interactive extravaganza showcased the animal’s astounding skills. We all watched in wonder as the dolphins and seals performed incredible acrobatics, danced, sang, juggled, played ball, jumped through hoops and even painted. The duration of the show was 45 minutes and we spent it on the edge of our seats. It was just spectacular!

After a busy morning of adventures, we were all quite hungry and were looking forward to our lunch. The weather was so beautiful, a light cool breeze and bright blue skies, perfect for a picnic. We all settled down on a large mat under the shade of the trees to enjoy our picnic of pizza, fries and juice. There was a hum of happy chatter as we all enjoyed our food and basked in the beauty of the outdoors. Soon it was time to go back to school, but first we had to clean up after our picnic. The children were so helpful and we had our picnic area spick and span in no time at all, ensuring no rubbish was left behind.

The bus journey back to school was quieter with many of the children falling asleep, tired after the busy day. We arrived back to school on schedule where the parents were eagerly awaiting the tales of our trip. The children were delighted to reunite with their parents and relay the stories from our trip. The children are to be commended on the exemplary behavior they displayed throughout the whole day. Many other visitors to the Dubai Dolphinarium commented on how lovely the students all looked and how well behaved they were. They were a true credit to our school and we should be proud to have them representing us. The day was made possible and proved to be such a roaring success due to the co-operation of both the students and staff. With the bar set high, we look forward to enjoying our next school trip together.