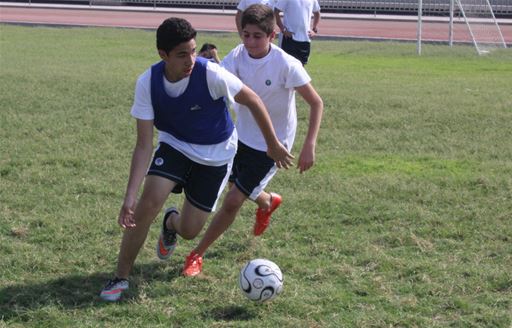 Our u14 Boys Football team came in third place at the Inter Choueifat Competition that took place in DXB last Saturday. Although the boys lost their first game, they did exceptionally well in the games that followed, with some impressive goals from the young side. Our u15 Girls Netball team also did well last weekend. 8 Students and their coach Ms. Orla made the trip to Abu Dhabi to compete. The girls finished the tournament in fourth place which was an excellent result as we sustained some injuries on the day. We lost our goalkeeper Yasmine in the second game to a sprained ankle. Our goal shooter Rein also sustained a similar injury in the first half of our penultimate game. Well done to both teams. Last weekend was the final weekend of competitions for us until term 2. We would like to thank all the students and coaches who took part in competitions in term 1. Your hard work and dedication is much appreciated.

Following on from last weeks drawn game the boys from 9A and 9B did battle once again on Monday in our Senior Football league.  With Mr. Ferdia as the referee 9B were victorious with a score of 5 goals to 2. 9B are now set to take on the grade 10 boys next week, a time is yet to be confirmed.

Again, we would like to say to well done to all the students from grades 5 -11 that took part in our after school clubs this term. This Thursday (November 12th) our clubs will finish, giving students the time to concentrate on their all important final exams. We hope that we will see a similar response in term 2.