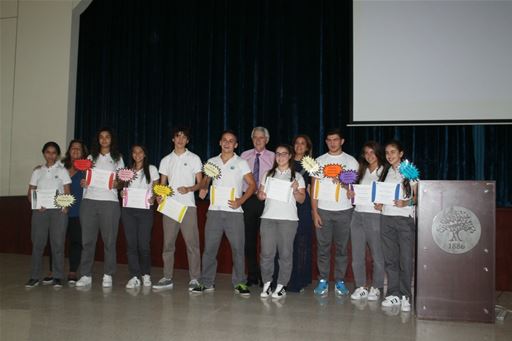 Our school annually hosts the Student Life Organization (SLO) Handover Ceremony wherein the preceding year’s prefects entrust their positions to those who have worked for, earned, and been rewarded a high title within the SLO. This year, however, we decided to switch things up a tad. Prefects chosen by our principal (Mr. Smooker), Senior AQC (Ms. Ghada) and SLC (Ms. Amal) were not informed beforehand of their new ranks. Instead, the revelation was to unfold at the Ceremony; with not one person in the crowd with a clue about who was to take over the Management, Academics, Sunshine, Lower School, Health & Sports, Social & Discipline departments. After a thought-provoking and inspiring speech by our director on how being a prefect, any prefect, in the SLO prepares you for the real world; instills in you leadership skills which prove to be useful throughout your life, and makes you an active part of society, both in and outside of school, the people whose hard work and determination merited them their prizes were called to the front, where they were given their positions. As the ceremony neared its end, refreshments were offered to all attendants - including a scrumptious chocolate cake covered in fondant, what better way to end a day!